A narrow strip of garden runs along the back of the house; it is 17 metres in length and just 5 metres in depth. North facing, it gets some sun at each end, dependent on the time of day. The garden is split level and the client is in a wheelchair. Raised beds have collapsed making the garden inaccessible and the fence has begun to slip owing to the dredging of the ditch beyond. It’s a tricky one!

Here’s what we did

The budget wouldn’t extend to a complete overhaul of the garden so the client requested it be ‘fixed’ instead. This would have involved rebuilding the very long raised bed and resurrecting the ‘turning circle’ that was originally designed for the garden (not by me!).

I wasn’t happy with the ‘turning circle’ for the client and his chair; it was at the lowest point of the garden and left him sitting in a shadowy hollow looking at the fence. Not great.

Together we worked out a budget which allowed us to build a deck. Decking is not my usual choice but this garden has a tenuous watery link ( the ditch beyond) so I can justify it. However the ultimate reason for the raised deck was to do just that, raise. Because this garden looks out across extensive playing fields and open countryside to the river beyond and that is the view I wanted my client to enjoy.

The deck runs flush with the terrace that surrounds the house. The client can access the area easily and not only gets to gaze across open countryside, he also enjoys the morning sun owing to a change in levels.

This was one of those gardens that evolved as we worked; we teased out its essence and went with it. Thankfully the client did too. The long flower beds had made the garden feel heavy. We chose to remove the one that ran along the edge of the terrace, reducing it to ground level, an area we then covered with golden gravel. The effect was instantly brighter and creates contrast within the space through texture and colour. Different shaped pots have been added to this area, planted up with shade loving perennials including ferns, hostas and various primulas. The gold of the gravel compliments the natural colour of the deck that has been deliberately retained.

The original path has been kept, for now. This leads to the deck at a lower level and separates the gravel area from a deep border. Because the client is passionate about plants we kept this bed, gave it a ‘deep weed’ and re-planted. Tall asters, that thrive here, were the inspiration for the colour scheme; lilacs, pinks, creams and deep burgundy and blue for depth.

From looking at the garden before we set to work we established that astrantias grow very well here and the client loves them so we saved them and added deep pink ones too. Peach foxgloves, white dicentra, thalictrum and  persicaria continue the cottage garden theme, achievable even in this shadier situation. Geranium Rozanne, an absolute stunner, produces blue flowers all through summer and grows to 1m x 1m so we planted one in an old Victorian chimney and another in a tall pot; these will spill over forming a glorious cascade of flowers. Evergreens include the occasional phormium, hellebores and scented sarcococca. Clematis have been planted to train up the newly painted fences. Getting the fence colour exactly right took a few sample pots until we discovered Cuprinol ‘Wild thyme’. This shade settles beautifully into the landscape, compliments the natural wood of the deck and looks simply gorgeous as a backdrop to the creamy astrantia.

One of the wonderful things about this garden is the clients grandchildren have already made it their own. Tell tale signs of gravel being driven around in toy trucks and little footprints where they have leapt of the deck mean this garden is already being enjoyed and that, is why we do this. 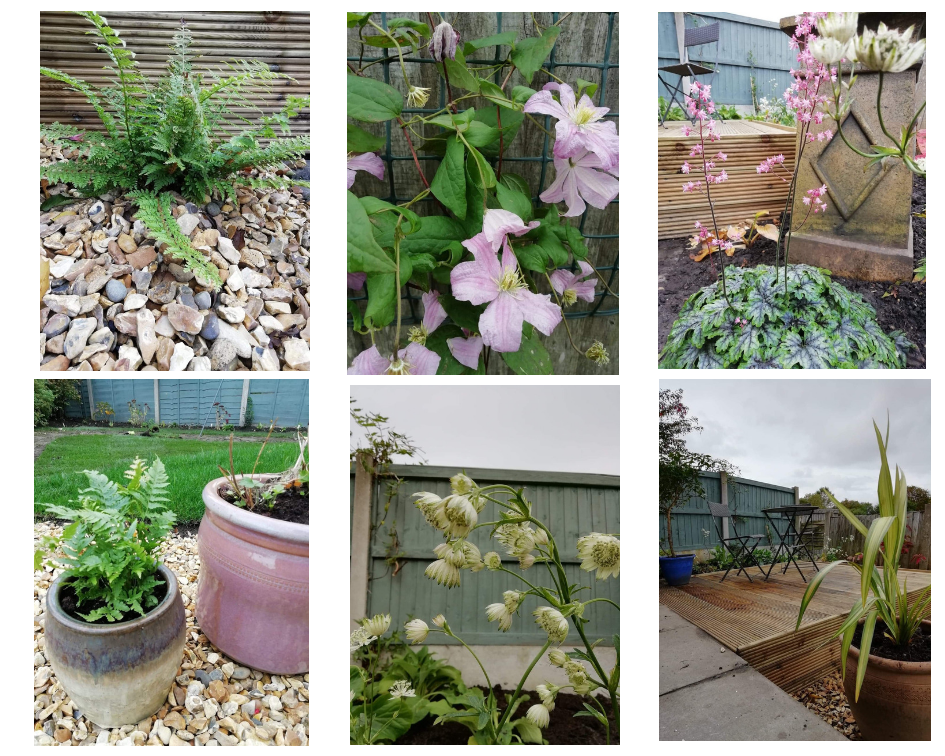